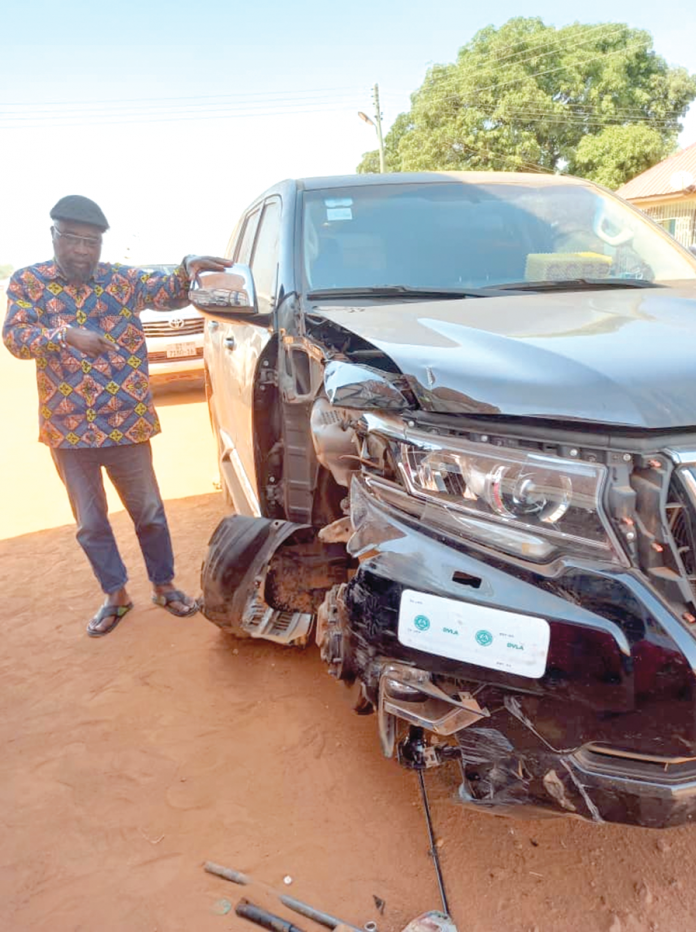 Dr Henry Herbert Lartey standing by the car after the accident

The Presidential candidate of the Great Consolidated Popular Party (GCPP), Dr Henry Herbert Lartey, and his driver escaped unhurt when his Toyota Prado car with registration number VD 337-20 veered off its lane and crashed into a Burkina Faso bound truck at Kontoso in the Upper East Region early Wednesday, December 2.

Dr Lartey was in the Upper East Region to continue his presidential campaign on his vision of transforming the country into a food basket and an exporter of solar energy to Africa and beyond when the accident occurred.

“The accident occurred early Wednesday when the car skidded off its lane. Our around the clock campaign that has taken us through many parts of the country seems to have taken a toll on my driver. He might have been very tired but did not tell me. Along the way at Kontoso in the Upper West Region, he lost control and the car veered off the road, skidded into the lane of a truck that was on its way to Burkina Faso and had  parts of the right side completely damaged,” Dr Lartey explained during an interview with the Daily Graphic.

On the nature of his health, he said in spite of the accident, he and his driver did not suffer any injury but gave the assurance that he would visit the hospital for a complete check-up before continuing with his campaign.

“There was considerable damage to the right side of the car and the fender, so the car has been rendered immovable now.

“I have just contacted the police to tow the car to either Navrongo or Bolgatanga for repairs while we continue the campaign to win more support,” he said, adding that the “near fatal accident should have slackened my campaign rounds but  the manner of support I had from people who came to the accident scene and the closeness of the elections, as well as my chances of emerging the eventual winner of the presidential election, have rather galvanised me to continue.”

He said he had put measures in place to get another vehicle for his campaign.

“That notwithstanding, I am going to the hospital for a checkup to ensure that I am fully fit before hitting the road again,” he said.

At the moment, he said he was with Mr Zakari Barri, his parliamentary candidate for the constituency to continue the campaign on transforming Ghana into a food basket through domestication of growing what we eat and eat what we grow.

Bundesliga: Lewandowski faces a challenge with Haaland’s rise on StarTimes

VIDEO: People like criticising my brother but they know his quality – Andre Ayew