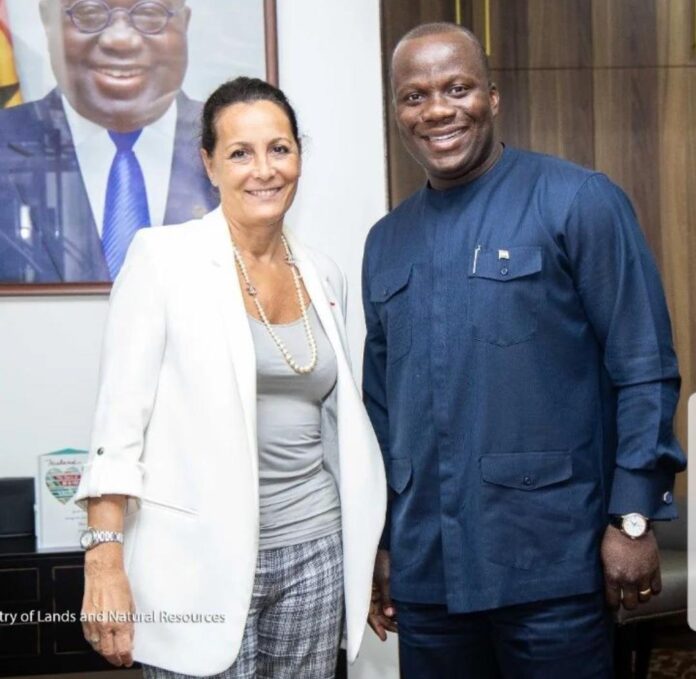 Friendship is brewing between French Ambassador to Ghana, Anne Sophie Ave, and Minister of Lands and Resources, Samuel Abu Jinapor.

This was made known by Amb Sophie Ave in a post she made to eulogize Mr Jinapor for the immense contribution he is making in his office.

Mr Jinapor has earned the honour to be called a “dear friend” for being accessible to the Ambassador at her beck and call.

She disclosed he was one of the very first persons she met when she arrived in Ghana four years ago when he was the Deputy Chief of Staff at the Office of the President.

Amb Sophie Ave said she is attracted to his positive traits which includes being knowledgeable, a fast thinker, efficient, hard working, straightforward and welcoming.

She also listed some projects they have undertaken together in their quest to make Ghana a developed country.

“Last year, together we commissioned the Shea butter factory in Murugu near Damongo, in his constituency. An exemplary project that created jobs and value chain for many women in the area.
“We later signed an agreement with @afd to fund other job creating projects in the area of environment. Last summer, I had the honour to have him as a guest on @touchoffrance.gh and it is an even bigger honour to call him a dear friend.”

Severed manhood in a jar found in garden