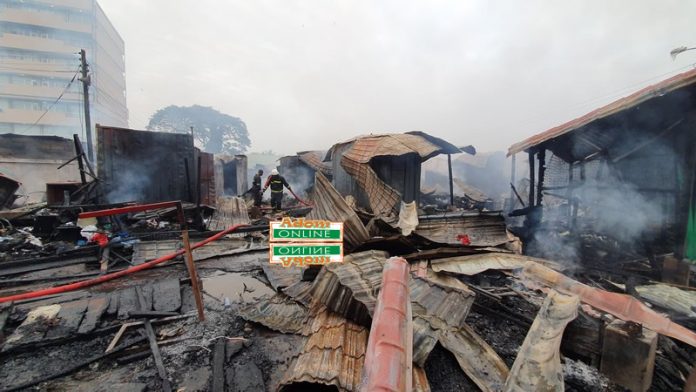 The Ghana National Fire Service says it is not to be blamed for the rampant fire outbreaks the country has witnessed in the past month.

Ghana National Fire Service’s Public Relations Officer, Ellis Okoe Robinson, said his outfit has notified the assemblies of possible solutions which they have failed to implement.

Speaking on the Big Agenda on the dawn fire that razed the Nkrumah Circle pedestrian mall and similar outbreaks in the past, he said it has investigated and submitted the reports to the local assemblies.

Trouble, though, is that the assemblies fail to implement the recommendations – claiming they don’t have the money to do so.

For instance, Mr Robbinson added, the Fire Service has directed metal containers be evicted, but more are rather surfacing.

He said the Accra Metropolitan Assembly asserts it could not eject the squatters because no provision had been made for them.

On line to contribute to the topic was the National Disaster Management Organisation’s Director of Communications, George Ayisi, who articulated that constant fire is causing both human and monetary loss to the state.

The topic had become a matter of public concern after an inferno razed down virtually all structures and traders’ wares at the Odawna pedestrian mall, Wednesday dawn.

Another decaying body discovered in uncompleted building in Bole