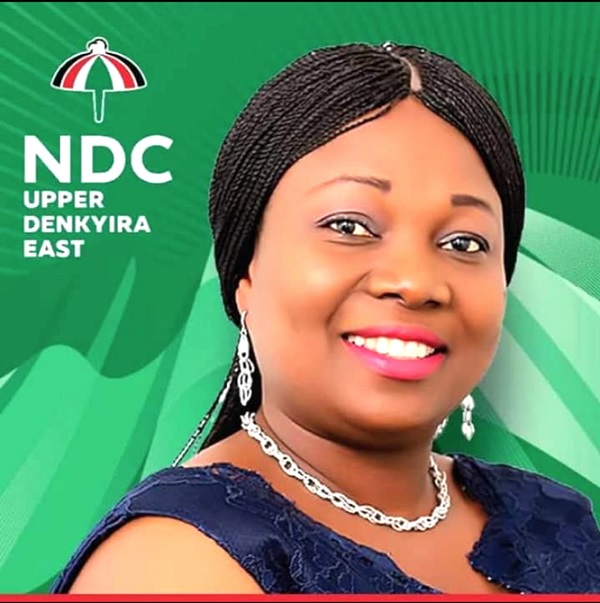 Growing up, Emelia Ankomah had a dream of being a leader in service but she never imagined the dream would usher her into the path of politics.

However, the strong desire to serve the interest of her people in the Upper Denkyira East in the Central Region as well as be a voice for the vulnerable such as women and children, set her on the path to be an advocate and now, she wants to pursue that mission by representing her people in Parliament.

In pursuance of her dream, she became a member of the National Democratic Congress (NDC) and gradually developed her credentials from the grassroots to become the Municipal Chief Executive of the Upper Denkyira East Municipal Assembly from 2013 to 2017.

Rather than see that role as compensation for losing out in the parliamentary race in 2011, she saw it as an opportunity to serve her people and after the initial term, she decided to contest in the Parliamentary race again.

Though she won the primaries, she lost the elections to the New Patriotic Party’s Nana Amoakoh Gyampa.

Four years on, Ms Ankomah is back in the race, as she attempts to wrest the seat from the NPP.

In an interview with The Mirror last Saturday when she graduated from the Wisconsin International University College, Ghana, with a LLB(Law), Ms Ankomah said her aim was to be a voice for the vulnerable and disadvantaged rural poor.

Also, she wants to help transform Denkyira to take its proper place in the history of Ghana and to empower the citizens of Upper Denkyira East, especially the women and the youth.

“Women are the backbone of Ghana’s economic development, particularly, the rural women given the role they play in providing food for the nation as farmers and being home managers as wives and mothers. Yet, they are still lagging behind in many things, and I have taken it upon myself to be a voice for them, as well as the vulnerable children and there is no better place to be a strong voice than in Parliament where all the laws and policies that affect their interest and wellbeing are enacted,” she said as she explained her determination of being in Parliament.

Political journey
Ms Ankomah said apart from her desire to pursue social justice and to be a part of the process to move the agenda to have more women in leadership, her innate desire to serve her people, albeit as a leader, was one of the main reasons she became a politician.

She began as a Women’s Organiser of the NDC at different times for Eboom/Sewia/Salem Akim-Ayirebi and Ofoase- Ayirebi constituencies and had played different roles in the Upper Denkyira East Constituency of the party.

Currently, she is a member of the Central Regional Conflict Resolution Committee of the party.

“It is not easy for women to get into politics, particularly in Ghana, but I had the strong desire to serve my people and that could be effectively done by taking up leadership roles and that was what encouraged me to choose a political path,” she said.

“Despite the seemingly success of women in leadership roles, the numbers are still very small when it comes to representation in Parliament and it is not easy going through the processes of winning primaries – the name-callings, the lack of resources and the issue of always having to justify why as a woman you want to lead and these are some of the hindrances to having more women in politics.

“The nomination of Prof. Naana Jane Opoku Agyemang as the running mate of the NDC is a huge effort in breaking the glass ceiling in Ghana politics, while she may not be the first to assume that role, she certainly is the first for a major political party, however, the ceiling is just cracked and not broken yet. There are still a lot of barriers that need to be dismantled from cultural orientation to breaking down stereotyping to shatter the ceiling.

“I am optimistic that we will make strides and I see myself as being part of that positive stride,” she said

Background
The highest office she has held so far is being MCE for Upper Denkyira East Municipal Assembly.
Before being appointed the MCE, she had worked with the National Health Insurance Authority and also with Commercial Associates.

Family
Ms Ankomah is married with two children and she jealously tries to keep her family out of the political limelight.

Education
Just last week, she graduated with first class in her LLB Law course at Wisconsin University College and has gained admission to the Ghana School of Law.

She is an alumni of the Kwame Nkrumah University of Science and Technology where she obtained a degree in Publishing Studies and also holds an Executive MBA from KNUST.

Before going to KNUST, Ms Ankomah had attended the Boa Amponsem Secondary School for her O and A Levels after her primary education at Kyekyewere, her hometown.