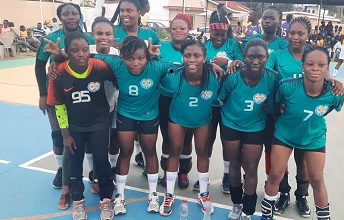 The two-day competition that was climaxed last Saturday at the Prisons Sports Complex at Cantonments in Accra saw eight of the regions best clubs engaged in a fierce battle across the net for honours, supremacy and bragging rights.

Adenta based Immanuel Presby volleyball club faced-off with Golden Hands in the men’s first semi-final encounter. It was two straight sets win for the lads from Teshie-Nungua who won  with a score of 25-23 and 25-16.

In the other semi-final encounter, ELWAK Wings also dispatched Nsawam based Blue Skies by two straight sets before clashing with Golden Hands in a five-set thriller and emerged champions.

The usual cacophony of noise that greets aerial challenges, spikes, hard-hitters, libero,flippers and flickers were all generated at the venue.

The competition, dubbed, Peace and Unity Volleyball championship to promote peace and unity prior, during and after the upcoming election, did not lose that spirit as there were lots of camaraderie present.
Greater Accra chairman and message
The Chairman of the Greater Accra Volleyball Association, George Tetteh lauded the players for participating in the tournament and the fans for coming our in their numbers to watch the display of talents and strength.

“This tournament is also to keep players of the various clubs fit and healthy ahead of the resumption of the league and for other national competitions,” he noted.
He appealed for support for the sport from the government and corporate agencies,saying it is only sponsorship that can sustain the rapid growth of the game.
Divine Edem Dotse
The manager and coach of the ELWAK Wings volleyball club appealed for sponsorship from corporate bodies to help the club challenge the security agencies during the league.

“I also thanked my players for showing up on the occasion and I charge them to go all out to attract invitation from the national body and play for the nation,” he noted.

Electricity supply is not a right, it is a privilege – ECG boss