Elections will be peaceful – President Akufo-Addo 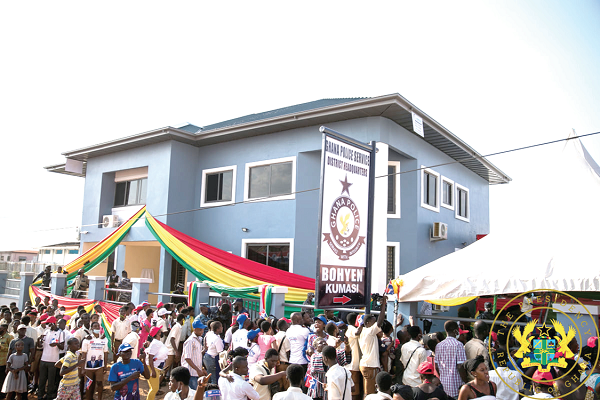 He said it was only people whose messages had been rejected by the electorate who threatened confusion and bloodshed during elections.

President Akufo-Addo was speaking at the inauguration of Bohyen District Police Station at Bohyen in the Bantama Constituency in the Ashanti Region as part of the final leg of his three-day campaign tour of the region.

The President was met by a large crowd of party supporters some of whom had waited for more than six hours to welcome him.

Clad in party paraphernalia and waving miniature Ghana and the New Patriotic Party (NPP) flags, the teeming supporters lined up the road, about 500 metres long, to welcome the President and his entourage.

President Akufo-Addo introduced the party’s parliamentary candidate for the constituency, Mr Francis Assenso-Boakye, who is also a Deputy Chief of Staff at the Presidency to the people.

He explained that Monday’s polls was only a process for all registered voters to select their choice of whom they wanted to lead the country and also represent them in parliament.

The President, therefore, said there was no need for anyone or group to resort to brute force because “people who would resort to force indicate that they don’t have any good message or their message has been rejected by the electorate”.

“If you have a good message that is readily accepted by the people you don’t need to issue threats or call for bloodshed. We should all ensure that the polls end up peacefully,” he said.

President Akufo-Addo urged the people to consider the work the government has done, especially the fulfilment of its promises which he said has had a positive impact in their lives and vote for him to continue with his transformational agenda.

The President, however, said he could not succeed in his agenda if his government did not have the majority in Parliament.

He, therefore, entreated the electorate to vote massively for all NPP parliamentary candidates at the polls on Monday.

On policing, President Akufo-Addo said the only effective way to fight crime and ensure protection of lives and property was for the people to cooperate with the police by providing them with adequate and reliable information.

He called for effective management of the facility to serve the purpose for which it was constructed.

The Ashanti Regional Police Commander, Commissioner of Police (COP) Mr Kwasi Mensah Duku, said the police station was the 10th of such a facility to be inaugurated in the Kumasi metropolis within a year, and commended Mr Assenso-Boakye for his support in the realisation of the project.

He said it was the responsibility of the security agencies to provide a secure environment for voters to exercise their franchise and said they were determined to ensure a peaceful election in the region.

Spotify and the future of African streaming

Why majority regional winnings do not decide Ghana’s presidential elections

More Cuban scholarships in the offing for Ghanaians