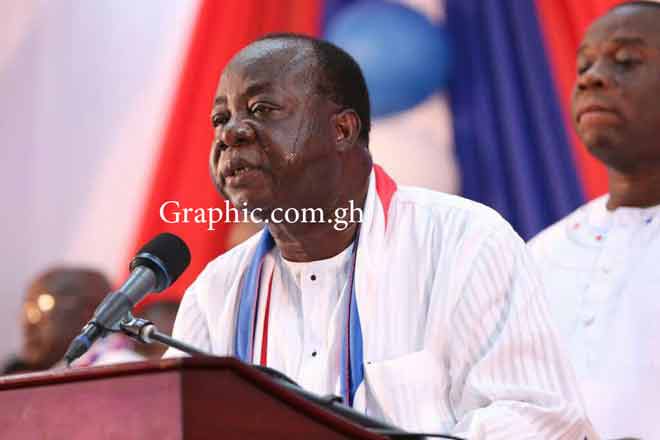 He said the Greater Accra Region was going to be the determining region on December 7, 2020 hence the need for the activists to work extra hard to win the elections, stressing that “until we clinch a resounding victory, we can’t sleep. If we sleep, it will slip.”

He was addressing the Greater Accra Regional and constituency executives as well metropolitan, municipal and district chief executives, government appointees, volunteer groups, Regional Campaign Team, patrons and some leading members of the region as part of his nationwide tour to ascertain the preparedness of the party for the December 7, 2020 elections.

Mr Blay described the Akufo-Addo government as peerless in the area of industrialisation, particularly in the development of the automobile industry in the West African sub-region.

“We have major automobile giants like Sino truck, Toyota, VW and Nissan all setting up assembly plants in the country. Beyond that local assembly companies have equally received help from tax incentives to serve as financial assistance,” he said.

Notwithstanding those massive achievements, he tasked the party machinery in the region not to sleep until the last ballot was counted and a resounding victory declared.

He commended the party’s leadership in the region and appealed to all executive members to bury their differences so as to prosecute the agenda with a united front.

Mr Blay said God had blessed the country with a decisive, compassionate, incorruptible and God-fearing President Nana Addo Dankwa Akufo-Addo to change the fortunes of the country for the better.

He mentioned some of the achievements of President Akufo-Addo as the restoration of teacher and nursing training allowances and free education for Ghanaian children.

Through the planting for food and jobs, he said, Ghana was currently exporting 19 food crops, and cocoa farmers for the first time in history had over 28 per cent increment in the producer price of cocoa.

He mentioned stable electricity, reduction in import duty, reduction in the cost of electricity, free electricity for over 1. 2 million lifeline consumers, free water to all Ghanaians, making teachers the centre of the country’s education, with the restoration of book and research allowances, the introduction of professional development allowance, the introduction of free postgraduate education for all medical doctors.

The Regional Chairman, Mr Devine Agorhom, assured the National Chairman that the regional machinery was poised for a resounding victory, come December 7 and that they would do all within their means to win the Greater Accra Region with a massive margin.