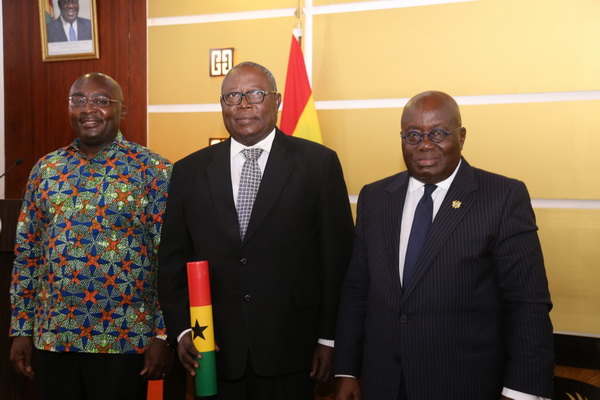 The opposition National Democratic Congress (NDC) says it is alarmed by the claims of former Special Prosecutor Martin Amidu that threats have been made on his person following his corruption risk assessment on the Agyapa Royalties deal.

The party is therefore calling on Ghanaians, traditional authorities and civil society groups to condemn the threats that have allegedly been made against Mr Amidu.

According to the party, the fight against corruption under President Akufo-Addo received its “final nail in the coffin” with the sudden resignation of Amidu on Monday, November 16, 2020.

Addressing a press conference on Thursday in Accra, the National Communications Officer of the NDC, Mr Sammy Gyamfi said Amidu’s claims which were contained in an interview with Accra-based Citi FM are evidence of how anti-corruption activists are being intimidated under the current government.

In the said interview, Amidu said he knew the persons behind the threats and had tried to contact the Minister of National Security, Albert Kan-Dapaah with his concerns but the latter did not pick his calls.

Amidu also stressed that the President should be held responsible if anything happens to him.

“To say that President Akufo-Addo’s so-called fight against corruption has been lost is an understatement. Today, every critical voice of dissent that dares to talk about the unprecedented corruption under this government has been suppressed,” Gyamfi said.

“The NDC has been alarmed and appalled by revelations by Martin Amidu about threats of robbery, arson and death on his life following the release of his corruption risk assessment report on the Agyapa scam. Martin Amidu at this point needs our collective prayer and protection against the vile threats directed at his life since according to him, the sudden demise of Flt. Lt. Jerry John Rawlings has removed the only protection enjoyed from such threats and wicked plans”.

No threats under NDC

Mr Gyamfi said even though the NDC disagreed with Mr Amidu on many issues when it was in government, there were no attempts to interfere with his work.

“We also call on all voices of conscience in a moral society, traditional authorities, and Civil Society to rise up and condemn the tyranny and totalitarianism being supervised by President Akufo-Addo. Under the erstwhile NDC/Mills administration and NDC/Mahama regime, Martin Amidu went about his anti-corruption activities in peace.

“Even though we disagreed with him on many issues, neither President Mills nor President John Mahama nor their appointees attempted to interfere with Martin Amidu’s work as citizen vigilante in any way. Nor was he threatened by anybody. So why is he being threatened with arson, robbery and death by the NPP now for professionally discharging his statutory duties as Special Prosecutor under the Akufo Addo government who touts themselves as apostles of the democracy”.