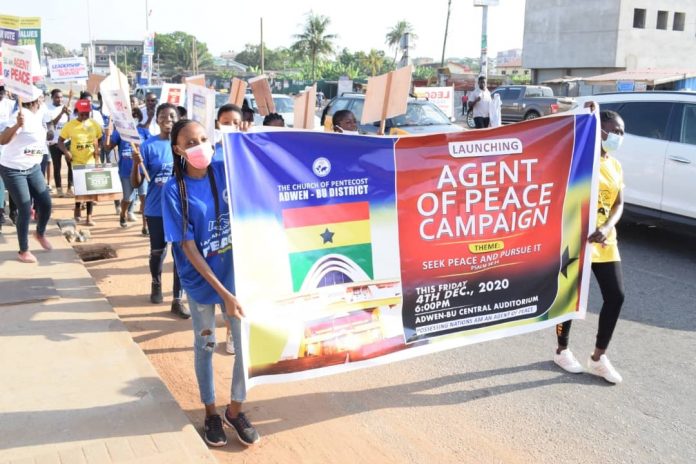 The Member of Parliament (MP) for Ablekuma Central, Ebenezer Nii Narh Nartey, has implored all to “preach and demonstrate peace” at all times to ensure that Ghana’s young democracy is not destablised.

He said peace is an essential commodity and therefore underscored the need to talk about peace at every given opportunity and not when there is an election.

Mr Nartey was speaking at the Agent of Peace Campaign launch at Adwen-Bu District of The Church of Pentecost under Kaneshie Area on Friday.

The launch brought together politicians, the Ghana Police Service, National Commission for Civic Education, religious leaders and a host of others.

The event was aimed, among others, at commissioning members of the Church as Agents of Peace into the Ablekuma Central Constituency in the Greater Accra Region where the District is traditionally located and anywhere they find themselves.

Prior to the launch of the Agent of Peace Campaign, youth of the six Local Assemblies making the District – Central (Salem), English, Mt Moriah, Hermon, Dromoshia and Emmanuel Assembly – held a Peace Walk through the Ablekuma Central constituency and displayed placards with inscriptions such as: We Need Each Other for A Better Ghana;  Your Tongue is like a Fire – Watch What You Say; Godly Values Pillars for Nation Building; I Stand for Peace; Free, Fair and Credible Elections; Peace Not Chaos and Be an Agent of Peace.

Committing to peace, the Member of Parliament noted that he has two best friends in Parliament and one of them is from the opposition National Democratic Congress and buttressed the fact that there is unity among politicians themselves, hence the need for their supporters to also live in peace.

“Unfortunately, those who don’t benefit from whichever government is in power are those who fight and maim each other,” he observed.

He emphasised that politics is about expressing one’s view as the best way development agenda should be executed.

Devoid of politicising the Peace Launch, the MP spoke passionately against electoral violence, saying: “I am not prepared to be a refugee, I prefer to be poor here than to be a servant in someone’s country.”

Launching the campaign, the Adwen-Bu District Pastor, Rev. William Ofori-Attah, admonished all to seek peace and pursue it, stressing the need for all to live in peace with everyone.

He quoted from 1 Peter 3: 10-11, which states in part that whoever loves life must keep his tongue from evil and his lips from deceitful speech.

“If you want to live long, stay away from the use of foul language but rather say and do things that will bring progress,” Rev. Ofori-Attah told the gathering.

Comfort Azalletey, Director of the National Commission for Civic Education, Ablekuma Central Municipality, advised Ghanaians not to allow politics to divide them.

Using Romans 12: 18 as a reference point, which entreats all to be responsible and peace seekers, she pointed out to all to do their maximum best to live with each other in peace.

She decried the “nasty” words used by some politicians and also during phone-ins on radio and wondered if the abusers would want the same insulting words used if the person at the receiving end is a close relative like a father or mother.

“What we do now is what we are teaching our future generation, so let’s choose our words carefully,” she advocated.

“Ghana is the only country we have so we should protect the peace that we have,” she said and urged all “to manage either our euphoria or disappointment after the election, and rather come together to support whoever emerges victorious in the election.”

A representative of the Ghana Police Service, Chief Inspector Christian Geraldo, said the police service is well equipped and ready to quell the activities of trouble makers in order to maintain the peace in the country.

He, therefore, implored all to comply with rules and regulations outlined for the election. He also charged the gathering to be true agents of peace by spreading peace within their community by advising persons notorious for fomenting troubles to avoid any act of vandalism.

Though the parliamentary of the National Democratic Congress, Abdul-Latif Dan, could not make it to the event, he sent his emissary to assure the Church of his commitment to peace.

The gathering was led by pastor Ofori-Attah to commit to peace before, during and after the general election. The Presiding Elder of the Central Assembly, Elder Albert Joseph Quarm, led the choir to sing patriotic songs to draw the curtain to end the event.

Photos from the Agent of Peace Campaign: