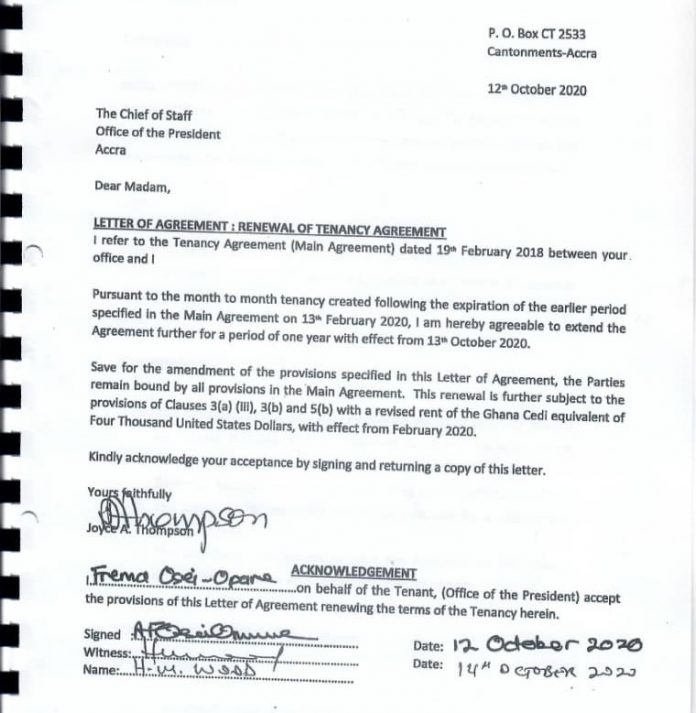 Director of Political Affairs at the Office of the Chief of Staff, Mr. Frank Asiedu Bekoe refuting reports circulating on the internet following the Special Prosecutor’s controversial resignation, said the reports are false.

The Office of the Chief of Staff has subsequently released the tenancy agreement between the owner of the facility, one Mrs. Joyce A. Thompson and the Office of the President, to set the records straight.

According to the tenancy agreement, the four bedroom storey building and a two bedroom bungalow building with numbered F73/6, Yantrebi Crescent, Labone, was first rented by the Chief of Staff on behalf of the Office of the President in February, 2018 and later renewed on monthly basis from February 2020 after the initial agreement expired.

Both parties early on in October, 2020 signed another agreement to extend the tenancy for a one-year period.

The tenant requested to use the property for commercial office purposes although it was meant for residential accommodation which the landlady agreed.

Explaining the matter to the media, Mr. Frank Asiedu Bekoe said the Office of the Chief of Staff has never had any issues concerning the office being used by Mr. Martin Amidu and added that during Mr. Martin Amidu’s tenure in office, he was never denied anything he requested for since the Office of the President believed that would enable him work effectively and efficiently.

He said the Chief of Staff is only a tenant and not the owner of the building as is being speculated.

Martin Amidu resigned on Monday, November 16, 2020 as Special Prosecutor alleging interferences from government officials as one of the reasons he could not continue to hold the office.

Mr. Amidu also cited unavailability of resources to discharge his duties as another reason why he has not been effective since his appointment.

“At no point did the President ask you to shelve the report, so he could ‘handle the matter’. It is difficult to see in what way and in what context the President would seek to ‘handle the matter’ when the matter was already public knowledge and had led to the Ministry of Finance suspending action on the Agyapa transaction in anticipation of your report”, said the Government in a statement responding to Martin Amidu’s claims.

Attached is a copy of the tenancy agreement.