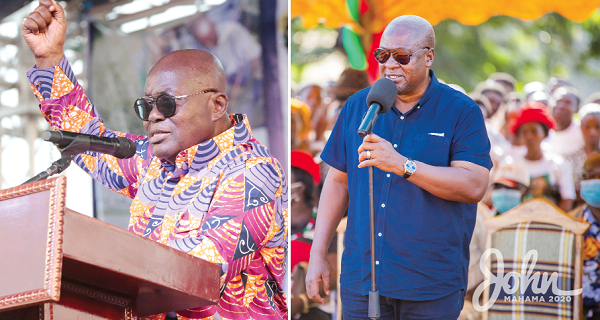 As the December 7 general election moves towards the home stretch, the two leading presidential candidates stormed each other’s stronghold over the weekend, urging the electorate there to change their voting pattern.

In the National Democratic Congress (NDC) stronghold of the Volta Region, where the New Patriotic Party (NPP) presidential candidate, President Nana Addo Dankwa Akufo-Addo, resumed his campaign after a one-week break, he built on his quest to ensure that the people of the region cast their ballots in an unprecedented fashion for the NPP this time.

The NDC presidential candidate, former President John Dramani Mahama, was in the Ashanti Region, the NPP stronghold, and his message was that the NDC had proved to be the party that had the development of the region at heart, for which reason the electorate must vote for it to come back and continue its infrastructure development.

Donald Ato Dapatem & Mary Anane-Amponsah report from Hohoe that addressing a mammoth rally at the Hohoe Roman Catholic Park in the Volta Region last Saturday, President Akufo-Addo referred to the region as a young lady and the NPP as a suitor.

“I am determined to marry the Volta Region. Just like the suitor, the NPP will be knocking on the doors of the young lady till she opens the door and says: ‘Now you can come in’,” he said.

Expatiating on his analogy, he noted that the beautiful lady the NPP had been dreaming of getting married to would initially say no, “but if you are persistent and show that you are sincere, the time will come and the door will be opened”.

It was an electrifying scene as President Akufo-Addo, who had led the crowd to observe a minute’s silence in memory of the late former President Jerry John Rawlings, set the crowd cheering with his speech.

The President said in 2016, he had campaigned on no record because he had not been in office as President.

He said because of that, he only made commitments that when voted into power, he would do certain things.

He said when he was given the mandate, he had remained faithful to his pledges, especially the promises he made in 2016, which had underlined his integrity as “a man who keeps his words and a man who fulfils his promises”.

He called on the people to continue to trust him, with the assurance that in the next four years, he would deliver better than the current one.

President Akufo-Addo said there was every indication that the umbrella, the symbol of the NDC, was badly damaged, with a lot of holes in it, to the extent that the NDC had nothing good for the people of the Volta Region.

He said although the NDC had dominated the politics of the region in the Fourth Republic, there was little to show for that.

However, within four years of the NPP, great changes were taking place in the region, he emphasised.

Earlier, the President had interacted with members of the clergy and chiefs in the area and inspected progress of work at the Hohoe Sports Stadium.

Mr Amewu, for his part, explained that the essence of voting for a particular party was to benefit from socioeconomic development and not just for voting sake.

A former General Secretary of the NPP, Mr Kwabena Adjei Agyapong, said he had travelled with President Akufo-Addo across the country and it was clear that he had delivered on his mandate in all areas, including infrastructure, education, the economy, water and energy.

“We have a President who is compassionate, competent, visionary, a man of action, love and serving the people of Ghana. I know that the Hohoe will lead the Volta Region to the NPP,” he said.

From Kumasi, Kester Aburam Korankye writes that Mr Mahama accused Nana Akufo-Addo of taking voters in the Ashanti Region for granted, in spite of their support for him and his party over the years.

He said although voters in the region had voted massively for President Akufo-Addo and the NPP to win the 2016 elections, the President had failed to return their support through projects and policies that would enhance their livelihoods and uplift Asanteman.

Addressing a massive rally at Aboabo in the Asawase Constituency yesterday, the former President said by failing to initiate new projects and continue with those started by the NDC in the region, President Akufo-Addo was indirectly saying that voters in the region would still vote for him and the party, irrespective of the impact of his leadership on their livelihoods.

He said that was not right, as the President did not have an automatic right to a second term.

Mr Mahama said due to the lack of infrastructural projects and the slow down of general development in the region, voters in the region must retaliate with their votes by voting the President and the NPP out of power.

He said it was necessary that the people changed their voting pattern because the current NPP administration took Ashanti votes for granted.

“Nana Akufo-Addo takes your votes for granted and that is why he ignored you after the election in 2016,” he said.

He admonished the electorate in the region not to be influenced by tokenism on election day to vote for the NPP.

He said such actions of doling out freebies to voters in the region ahead of the elections were an indictment on the intellect of the voters.