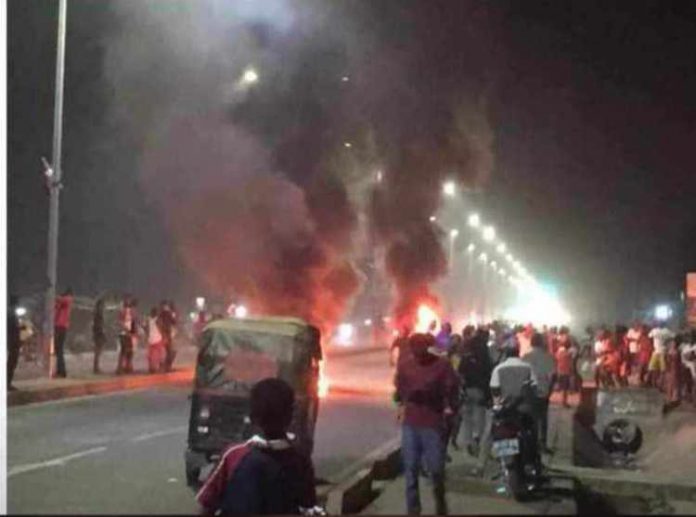 Security personnel in the Northern Regional capital, Tamale have fired warning shots to disperse some people believed to be NDC supporters who poured onto the streets to celebrate.

Amidst the burning of tyres, the crowd, from different parts of the city were expressing their approval over the decision by the party’s flagbearer, John Dramani Mahama to reject the election verdict by the Electoral Commission (EC).

JoyNews sources indicate that areas such as Kalphoni, King David Junction, Fatawu Bicycles, Afa Ajura Mosque, Agric Traffic Light, the Goil Station opposite Absa Bank, Kakpayili, and many other places had tyres being burnt in the middle of the street.

This was minutes after Mr. Mahama declared his unwillingness to accept the 2020 presidential and parliamentary results.

At a press conference on Wednesday, December 9, Chairperson of the EC, Jean Mensa had stated that the NPP’s flagbearer, Nana Akufo-Addo has polled 6,730,413 of the total valid votes representing 51.59% while John Mahama of the NDC had 6,214,889 which gives him 47.36% of the total votes cast in the December 7 polls.

This results has since been rejected by the leadership of the NDC and some supporters.

Backing this stance, the flagbearer of the party, John Dramani Mahama had questioned the credibility of the EC and rejected the verdict by the Commission.

He had also urged supporters of the NDC to remain calm while leadership puts in place measures to overturn the election results.

This subsequently led to some party faithful hitting the street to jubilate in support of their flagbearer.

Meanwhile, the incident at Tamale has been trending on social media with many calling for calm and peace to prevail.