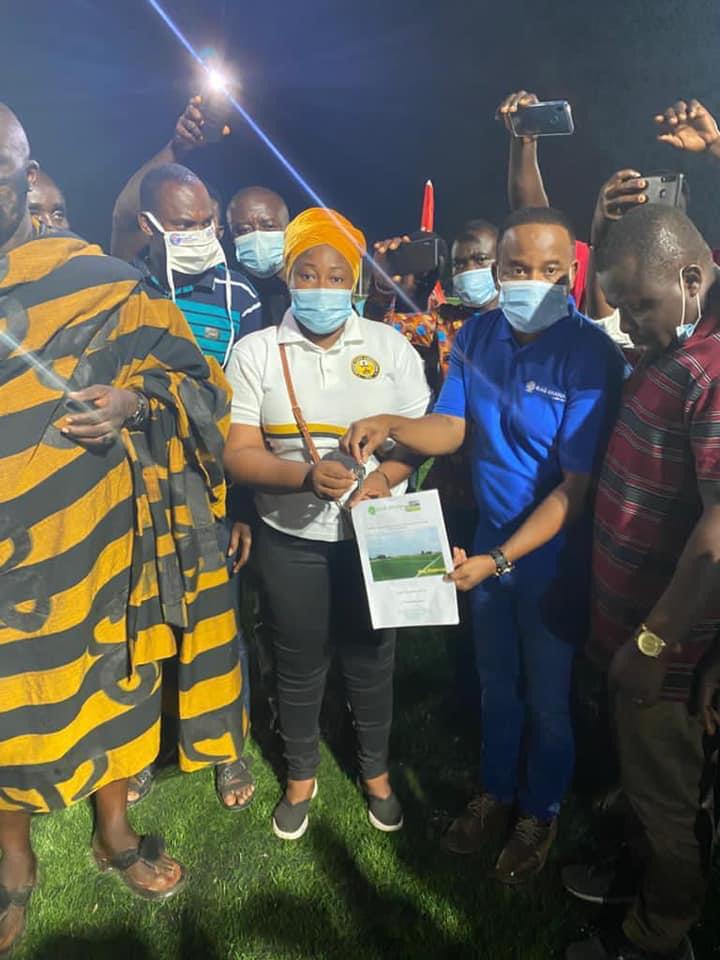 The Atonsu M/A Junior High School (JHS) Park in the Asokwa Municipality of the Ashanti Region has been transformed into a modern-day artificial turf by the Ghana National Petroleum Commission (GNPC).

The 11-a-side football facility with floodlights was constructed by artificial grass expert BLAG Ghana Limited under the GNPC Foundation.

According to contractor the transformation of the Atonsu M/A JHS Park forms part of GNPC’s several projects under construction across the country.

Speaking at the inauguration of the park, the Chief Operating Officer of BLAG Ghana, Eddie Dankwa, said the artificial turf would provide footballers within Asokwa and its environs with the opportunity to build their careers on a FIFA certified pitch.

Mr Dankwa was keen on providing more community pitches with quality artificial turfs to help in the development of football at the district level.

He said: “We have been in this business for a very long time and our focus is to continue providing our customers with the best of turf which the Atonsu Park remains an example

“The focus is to help give every community park a facelift with FIFA-certified artificial grass to help build careers from the grassroots,” Mr Dankwa told GraphicOnline.

Madam Loubaba Habib Jawala, a representative of GNPC, stated that the completed facility would serve the people of Asokwa and the Ashanti region well.

She noted that the constructed pitch will help prevent injuries to players within the community.

“This is going to help the whole of Ashanti Region,” she said.

The MP (Member of Parliament) for the Asokwa Constituency, Mrs Patricia Appiagyei, expressed appreciation to GNPC for funding the artificial pitch.

She noted that the municipality had bad pitches, and the constructed facility is timely since the youth can now have a better field to play football on.

Mrs Appiagyei commended the local authorities as well as the Municipal Assembly for supporting the initiative and urged caretakers of the facility to draw up a strict maintenance regime.

“This is a timely intervention and we are grateful for the decision to help the youth who has adopted football as their source of livelihoods in the community,” she said.

Nana Yaw Adarkwa Yiadom Gu-Ayeboafoh II, Chief of Atonsu also lauded the efforts of GNPC and the MP for the project which he said would provide space for the youth to explore their talents and skill in football.

Shocking as over 60 dead dolphins washed ashore coasts of Axim