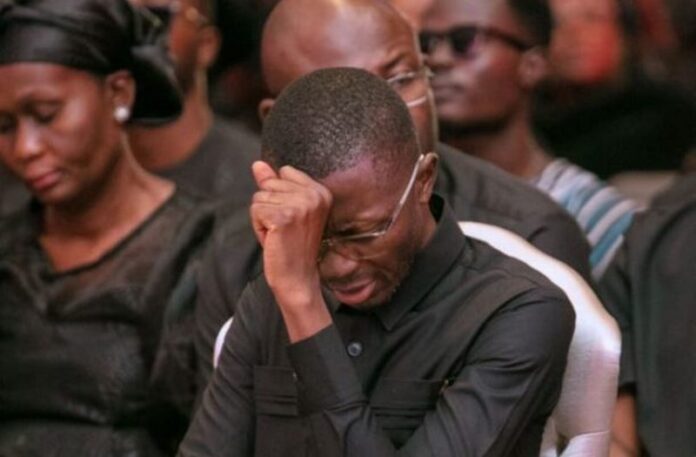 Extolling the qualities of his wife at a memorial service at Cedar Mountain Capel, he said she always ensured that they stayed in touch with people they knew even when he was busy to do so.

The General Manager of Citi FM said his wife had the ability to know which people belonged in their lives and often initiated contact with them.

In this regard, he said his late wife was crucial in helping to cover all his blind spots.

“She covered my blind spots in multiple ways. She always urged me to check on this or that friend and made a conscious effort to call or text,” he said.

He added that his wife played a crucial role in him fostering a closer relationship with Jesus. Justine Avle, Bernard Avle said was “a real gem who nurtured meaningful relationships, loved her family, and sought to not compete with but complement and complete me,” and that his “relationship with the Lord Jesus has grown steadily because of her.”

The Citi Breakfast Show host stated that his late wife was God-sent.

He explained that two weeks prior to their meeting in 2005 at the University of Ghana, he had prayed to God to reveal to him who he should marry.

In the month of October, Bernard Avle said he met his would-be wife, Justine at a youth power conference where they had a shared passion for the work of God.

“I met Justine on Saturday, October 15, 2005, at the Great Hall of the University of Ghana at the Youth Power Conference. Two weeks prior to this event, Citi FM had organized the first of what would become regular half-night programmes. The September 2005 edition was held on the last Friday of that month at the Exhibition Assemblies of God Church.

“It was after prayers for the nation and other issues that Pastor Stephen Wengam, lead pastor, asked that we make a final prayer to God for one specific thing that we wanted God to do for us. I asked the Lord to reveal His will concerning who he wanted me to marry. Exactly two weeks later after this half-night prayer programme, on Saturday, October 15, 2005, I met Justine,” he said.

“Every plan Justine had in ministry included an intention to reach out to the vulnerable and disadvantaged. She loved admonishing people because her meaningful experiences along life’s tortuous paths had produced in her a fragrance that refreshed and soothed the hurting,” he added.

Checkout major pipeline projects expected to take off in 2022