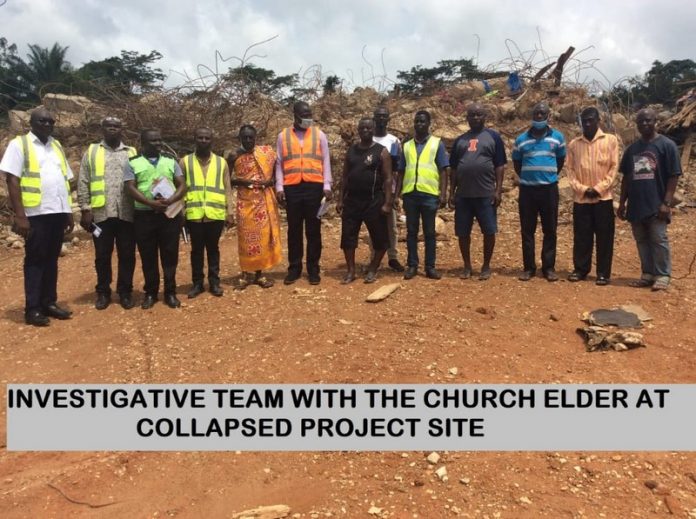 The Committee, set up by the Institution of Engineering and Technology – Ghana (IET-GH) also noted among its key findings that “In the course of the construction, the church altered the building design to a four-storey building with the prophet’s residence on top, without retrofitting or fortifying the original foundation meant for a single storey church auditorium, or without consulting any building professional.

In an 88 page report, it also observed that, although the Asene-Manso-Akroso District Assembly disinfected the church premises against COVID-19 pandemic on October, 17, preceding the building collapse, it did not notice any defect on the building or find out whether the church had permit to put up such a huge structure.

The four-member committee visited the church building collapse site for physical observations and caused structural integrity test to be conducted.

The church building collapsed on  October 20  entrapping and killing 22 and injuring eight members.

One other member got missing and could not be found after a rigorous rescue operation.

After reviewing all Test Results, Physical Observations, Interviews and Desk Study, the investigative team concluded that the cause of the Batabi Church of Prosperity Building collapse was as a result of poor quality workmanship and Institutional failure.

- Advertisement -
Facebook
Twitter
Pinterest
WhatsApp
Previous articleFunny Face deletes all pictures and videos of his twin daughters on social media
Next articleAmidu’s resignation: Public drama could have been avoided

Tears as lady is electrocuted at night club