Akufo-Addo votes at Rock of Ages Polling Station One 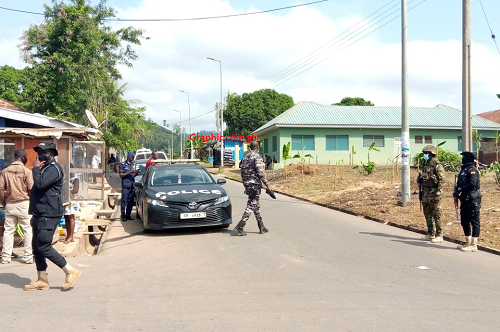 President Nana Addo Dankwa Akufo-Addo on Monday morning cast his ballot in his hometown, Kyebi, in the Eastern Region.

He voted at the Rock of Ages Polling Station One in the Abuakwa South Constituency.

He was accompanied by the Member of Parliament for Abuakwa South area, Mr Samuel Atta Akyea who had earlier cast his ballot at the Magistrate Court Polling Station, also in Kyebi.

Meanwhile, polls started at the Rock of Ages Polling Station exactly 7:00am with many voters queuing to vote.

As of 8:30am, 55 people out of the expected 473 registered voters at the centre had successfully went through the process.

At the Rock of Ages Polling Station Two, 53 people had cast their ballots as of 8:30 am.

At the Magistrate Court Polling Station, 68 people out of the 567 total registered voters at the centre had voted as of the time Graphic Online visited the centre.

All COVID-19 safety protocols including the washing of hands, use of hand sanitizer, checking of temperatures, and wearing of nose masks were being observed in all the polling centres visited.