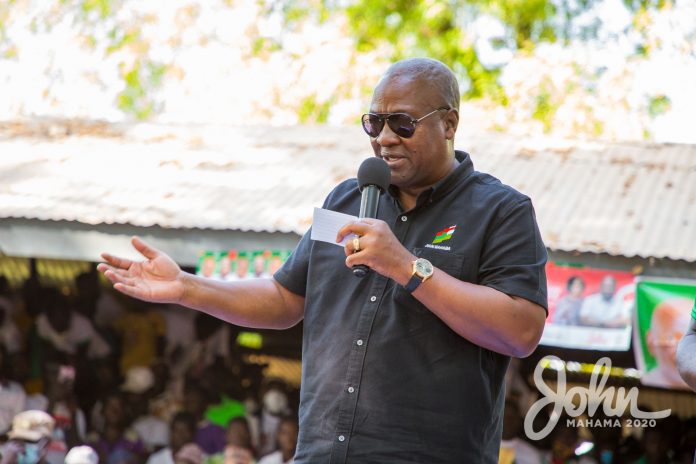 The Presidential Candidate of the National Democratic Congress (NDC), former President John Dramani, has accused President Nana Addo Dankwa Akufo-Addo and the New Patriotic Party of using sweet words and lofty promises to deceive Ghanaians into voting for them in 2016.

Mr Mahama said the tenure of President Akufo-Addo had revealed that he was deliberate in making promises that he did not intend to keep except to win electoral fortunes.

From the pledge to reign in corruption, reduce borrowing and run a lean government, Mr Mahama said evidence abound that President Akufo-Addo and the NPP regime were doing the exact opposite of what they pledged when they were in opposition.

“This government has been a scam on Ghanaians. In 2016, they said all kinds of sweet things, they said we were sitting on money and that Ghana was sorrowful and that we should vote for them to transform Ghana in 16 months. But today we are even hungrier than we were in 2016,” Mr Mahama told party supporters in Bongo in the Upper East Region.

“The President said in 2016 that he was coming to fight corruption but today the President and his family are swimming in corruption,” he added.

Mr Mahama cited the circumstances leading to the resignation of the former Special Prosecutor, Mr Martin Amidu, as evidence that President Akufo-Addo was not committed to the fight against corruption, given that he and his close associates were profiting from the canker.

The NDC Presidential Candidate said as a result of these, voters must vote President AkufoAddo and the NPP out of power and return the NDC to create an equal and just society for all.

He said a recent survey found that more than 60 per cent of Ghanaians said their livelihoods were worse off than it was four years ago.

This, he said, showed that the NPP government was a threat to the development of an inclusive society.

Mr Mahama also accused the the government of using funds from the Ghana Stabilization Fund to buy votes under the guise of supporting businesses to cope with the COVID-19 pandemic.

While denouncing the practice as distasteful, he said voters must not reject the loans when offered but must be confident enough to vote the government out of power.

He also used the opportunity to educate the voters on how to vote for the NDC to avoid having their votes disqualified.