Newsday Ghana
HomeGeneral NewsAkufo-Addo on why Mahama does not fear God...
General News

Akufo-Addo on why Mahama does not fear God… 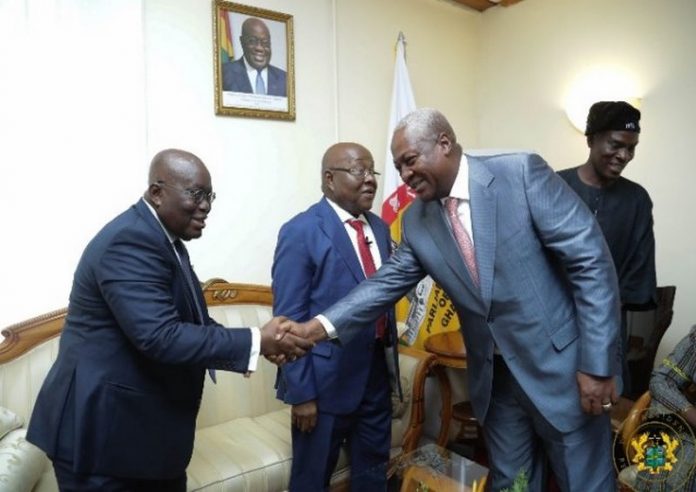 President Nana Addo Dankwa Akufo-Addo says former President John Mahama has resorted to lies and outright fabrications because he does not fear God.

He wondered why the former President, who vehemently opposed the free Senior High School (SHS) policy could turn around and claim that he initiated it.

He said contrary to Mr Mahama’s alleged claims that Ghanaians have short memory, Ghanaians still remember everything about the free SHS programme and would teach him (Mr Mahama) a lesson at the polls on December 7.

President Akufo-Addo was speaking in an interview at Angel FM at the start of his three-day campaign tour of the Ashanti Region.

A large crowd of residents and party supporters clad in NPP paraphernalia, who got wind of the President’s visit to the radio station, massed up in front of the station which is at Abrepo Junction.

President Akufo-Addo expressed surprise at the fact that the very person (Mr Mahama) who claimed that the free SHS was not good now wants to be recognised as the originator of the policy.

He explained that there was every indication that the NDC campaign had collapsed and that was why he was resorting to outright lies and fabrications.

“I remember that in 2016, he described the Free SHS policy as a dangerous one and that Ghanaians should not allow Akufo-Addo to come and destroy our educational system. He even claimed that there are a lot of African countries that tried the policy but not successful with it,” he said.

He said former President Mahama and the NDC had realised that not only had the policy worked but the final results which were very good had vindicated its implementation.

President Akufo-Addo said he was surprised that a section of the Ghanaian population wanted the policy to fail and for that reason, they prayed that the students would not fare well in their final examination because of partisan political gains.

“Can you believe that people have that kind of attitude towards the development of our country that a whole generation of our people should fail because of politics? We thank God that he did not allow that to happen,” he said.

He expressed excitement that the outstanding performance of the first batch of the students had vindicated the policy, adding that with all its initial challenges, the result had shown that the policy was in the right direction.

President Akufo-Addo stated that countries that had made it to the developed stage could do so because they educated their people.

Narrating some of the reasons behind the establishment of the policy, the President said his parents could afford when he was going to school but he realised that some of his colleagues, some of whom might have been more brilliant than him could not make it to the secondary level because their parents could not afford.

He said America, the first country in the world to execute free secondary education took that decision over a century ago and the fruits had been enormous for them.

“You can imagine the change that will come to our social relations when every Ghanaian has at least secondary education. This will change so many things in the country,” he said.

He said the NPP wanted to ensure that every Ghanaian child, irrespective of their social and economic status would have at least secondary education.

He said he was happy that Mr Mahama had also embraced the free SHS but expressed suspicion, noting that: “I don’t know how genuine his embrace of the policy is. Someone who vehemently opposed the policy. I am a bit scared about that.”