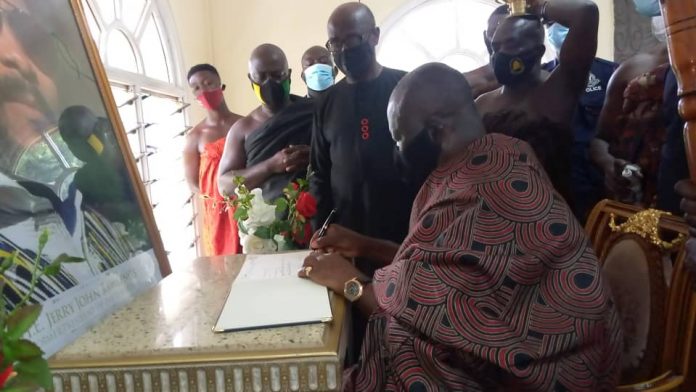 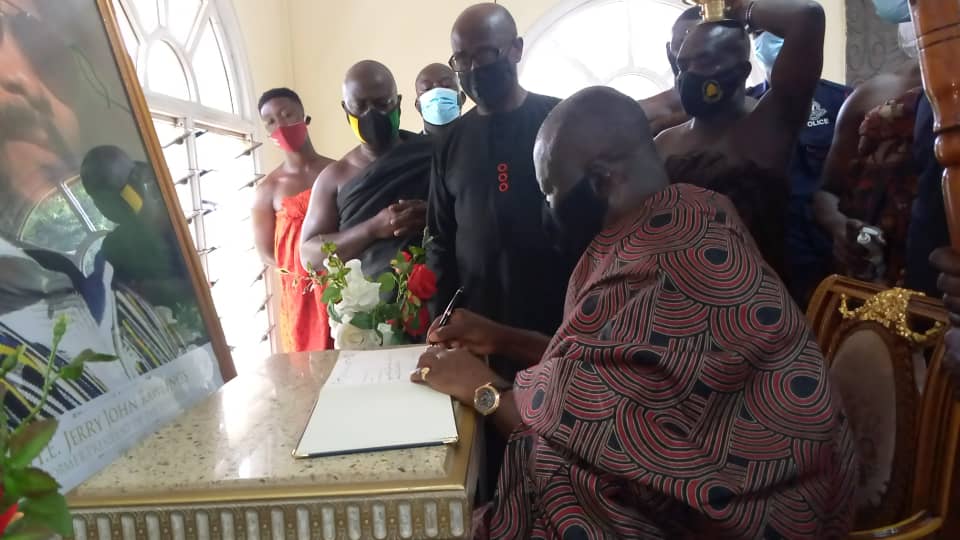 Ogyeahohuo Yaw Gyebi II, the President of the National House of Chiefs, signing the book of condolence in memory of the late Flt Lt Jerry John Rawlings. Looking on are some members of the House of Chiefs

The Asantehene, Otumfuo Osei Tutu II has paid tribute to the late former President Jerry John Rawlings for his contribution towards multi party democracy in Ghana.

He said even though Rawlings came to power through the gun, he adapted to the new wind of change and accepted multiparty democracy to usher Ghana into democracy by playing a very instrumental role in the current status the country was enjoying and has now become the envy of the sub region.

Otumfuo said this when Ambassador Victor Gbeho led a delegation to officially inform the Asantehene of the death of the former president at the Manhyia Palace on Thursday, November 19, 2020.

The Asantehene who recounted his encounters with the former president and the close bond they had, called on Ghanaians to honour his memory by coming together and unite as one and send him peacefully to his final destination.

He said this was no time for lot of talks but instead, time to unite and come together as one.

The Asantehene later signed the book of condolence opened in honour of late former President.

Mr Gbeho who led the delegation, said they were at the palace to officially inform the Asantehene of the death of the former president.

He said it was the third time in six weeks that the family was visiting the palace, all with bad news.

He said the government “is cooperating exceedingly with us. It has already told us that it will give our late president a state funeral and we are in touch with others to determine the date and nature and venue of the funeral”

He formal invitation would be extended the the Asantehene when all the details were confirmed.