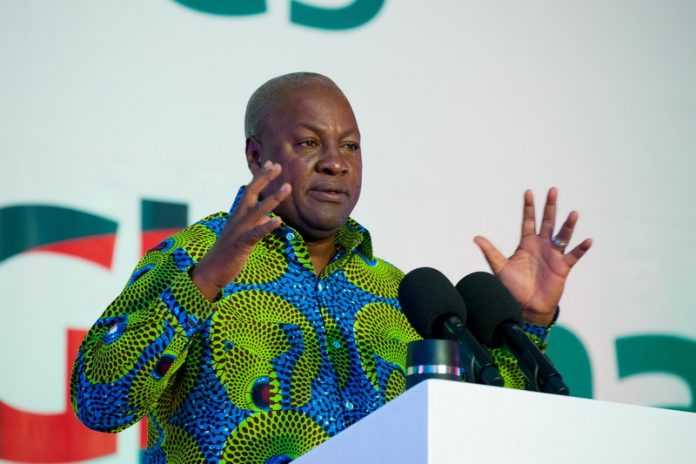 The next National Democratic Congress (NDC) Government will prosecute anyone who sought to perpetuate fraud in the Agyapa Deal, Mr John Dramani Mahama, presidential candidate of the NDC, has said.

Speaking at a mini rally at Bosomkyekye in the Asante Mampong Municipality in the Ashanti Region, Mr Mahama said all those who had been paid some money in the Agyapa Deal would be made to refund it; otherwise, they would apply the Special Prosecutor’s recommendations.

The Presidential Candidate said his next government would deal ruthless with any act of corruption.

He explained that the Ghana Gold Company that his previous administration wanted to use to monetize the country’s gold royalties was 100 percent owned by Ghanaians.

Agyapa Royalties deal to go back to Parliament

He further argued that the Agyapa deal was shrouded in secrecy to short-change Ghanaians.

“The difference is that, the proposed Ghana Gold Company was going to be 100 percent owned by the government and the people of Ghana and not the Agyapa one. With the Agyapa deal, Ghana owns only 51 percent and 49 percent held by other people we don’t know. Ghana Gold Company was being registered here in Ghana but Agyapa was registered in an offshore tax haven so that the identities of the shareholders will be hidden.

Civil society organizations and right-thinking Ghanaians have all expressed misgivings with this Agyapa deal. And I have said and my advice to president Akufo-Addo is that, they should desist immediately from signing that deal because as we have said clearly, we are going to oppose it, and we will do everything legitimate to frustrate that agreement in the interest of Ghanaians,” he said.

He added that, “If I become president and by the will of God, I will become president, I will not respect that agreement. They should bring that agreement back and hold a meeting with civil society organizations, the chiefs, and all the stakeholders to whom that gold royalties belong and let us achieve consensus on how we want to monetize our gold royalties and every penny that has gone underhand will be retrieved. I assure you. So they (government officials) should return those monies.”

Man caught with stolen meat tied around his body [Video]