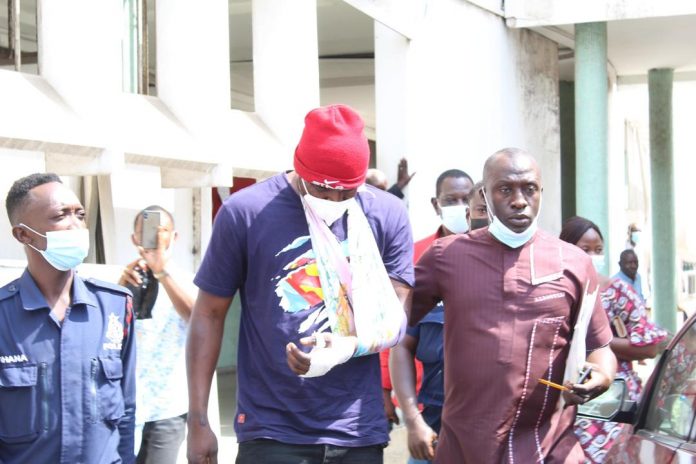 The Accra High Court has granted ¢200,000 bail with three sureties to the accused National Security officer standing trial for his involvement in the electoral violence at the Ablekuma Central Constituency Collation Centre on December 8, 2020.

Collins Quarcoo alias Kola, the gunman was on Monday was asked by the Criminal Court 4 to meet the bail condition of his sureties, whom shall be public servants earning not less than ¢15,000 a month and must show evidence of their earnings.

Kola on December 17, 2020, when the case was first called was remanded by the Circuit Court Judge, Emmanuel Essandoh.

The judge has since been indisposed and this had led to the postponement of hearing on four different occasions.

One of the victims, Pius Kwanin Asiedu, was not informed of the bail application and only got to know that the suspect has been granted bail only on Wednesday.

J. Opoku Agyei, the lawyer holding watching brief for Asiedu, said he technically the prosecution is not obliged to inform the complainants about the application for bail but in this case, where the accused has perpetrated violence by discharging a firearm at five people, it is only fair that they should have been told.

He said in Asiedu’s case, it is even more serious because he lives in the same neighbourhood as the accused.

The accused, Collins Quarcoo was arraigned on six counts including causing harm, possession of firearms without lawful authority and using offensive weapons without legal authority.

He pleaded not guilty to all charges.

Mr Quarcoo is accused of shooting five persons, including a police officer and a journalist at the Odorkor Police Church collation centre.

The victims include Police Inspector, Nixon Awuni and Pius Kwanin Asiedu, a journalist with the Newswatchgh.com and Rashid Umar, a trader and NDC Vice Chairman of Sabon Zongo.

In an oral presentation by his lawyers to the Circuit Court, the accused who was reported to be a National Security operative is said to have fired indiscriminately into the crowd at a collation centre in the Ablekuma Central Constituency after having a brief discussion with the MP.

The lawyer for the accused Faisal Cisse pleaded for bail for his client arguing that his client is a public officer and not a flight risk.

The Circuit Court judge Emmanuel Essandoh who is currently indisposed adjourned proceedings to December 24, 2020, and later postponed to December 31, 2020, and January 5 and 11, this year.

Meanwhile, the Ghana Journalists Association (GJA) has promised to follow the case through to the end.