A vote for Akufo-Addo is a vote for development, progress – Bawumia 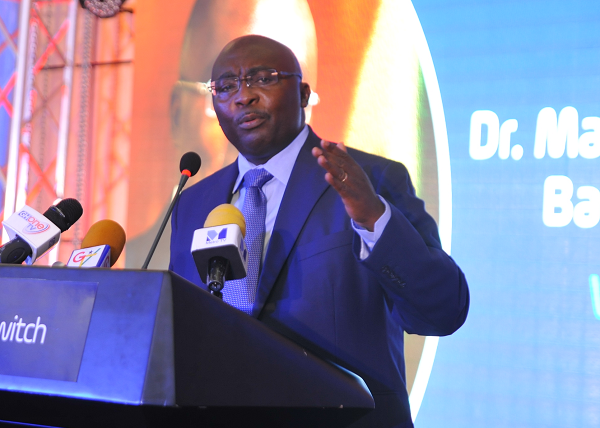 The Vice President, Dr Mahamudu Bawumia has reminded Ghanaians to be mindful of the clueless stewardship of former President John Mahama prior to the election of the NPP government in 2016 so as not to jeopardize the progress made with eleven days to this year’s elections.

He said from all indications it was clear that the Mahama-led NDC government lost its way and did not have any idea on how to get the country out of the ditch he drove it into.

What was painful, Dr Bawumia said, was the blunt and uncaring response to Ghanaians to “get out of the kitchen if it is too hot,” when they complained about the pain and suffering at the time.

Dr Bawumia who was delivering a lecture on the topic; “ A Case of Four More Years To Do More For You” at the Cedi Conference Centre at the Department of Economics, University of Ghana in Accra on Thursday night, [November 26, 2020], said former President Mahama in broadly dismissive terms, went further to state that he was like a dead goat who could not be moved by the complaints of suffering.

However, he said President Akufo-Addo had largely alleviated the hardships Ghanaians were facing under the Mahama-led NDC government with a master plan which included rolling back the human cost of the economic mismanagement, and created the foundations for an inclusive, prosperous Ghana beyond aid.

The plan, Dr Bawumia explained, was based on seven objectives which was to stabilise and grow the economy, transform the economy, create jobs, especially for the youth as well as modernize, digitize and formalize the country’s economy.

He said the NPP government sought to make development inclusive and protect the vulnerable, fight corruption, and create a safe, secure environment for citizens and businesses to thrive.

Tracing how far the government had come to realizing these objectives, Vice-President Bawumia said in the face of the coronavirus pandemic which had impacted all economies in the world the government was able to stabilize the economy, reduce inflation and record double digit economic growth in its first three years.

Dr Bawumia indicated that the relatively strong performance of the economy, among other things, led to Ghana becoming the destination of choice for Foreign Direct Investments (FDI) in West Africa, pointing out that the strong economy the Akufo-Addo government had built had enabled it to provide the basic needs for the people as part of its broad, inclusive, transformational development strategy and also to withstand crises like Covid-19.

Indeed, he said, the shock of Covid-19 notwithstanding, the economy was bouncing back.

Quoting a Bloomberg report in his presentation, the Vice-President said “Ghana was one of the first countries in sub-Saharan Africa to lower interest rates to counter the virus shock while its economy had performed better than forecasted even as the pandemic stalled activities and the oil price slumped.”

“We have cleaned up the mess in the financial sector that we inherited. We took decisive decisions to avoid the collapse of the financial sector, save the deposits of 4.6 million depositors and save jobs. Thus far, government has spent GH¢21 billion to clean up the sector,” the Vice-President emphasized.