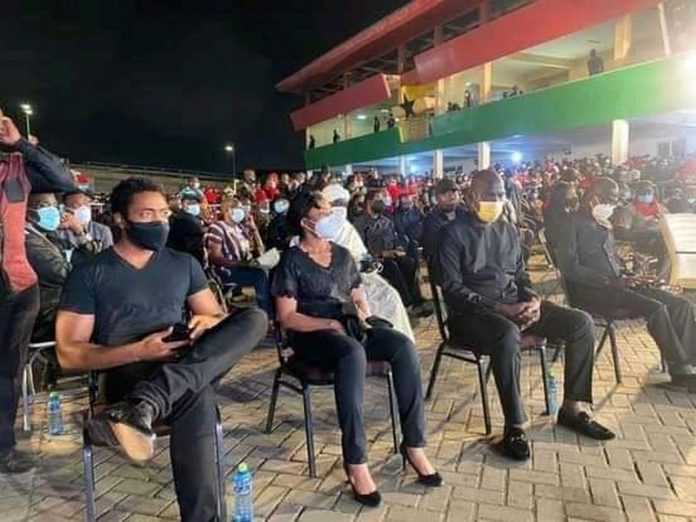 Aside the public knowledge that Kimathi Rawlings is the son of the late former President Jerry John Rawlings and former First Lady Nana Konadu Agyemang-Rawlings, little is known about the handsome young man.

However, following the demise of his father, he has become a centre of attention, especially on social media primarily for two reasons: his presence at the vigil organised by the National Democratic Congress in honour of his father and his striking personality which is manifested in his accent, composure and overall exposure.

Although he has been in the full glare of the public for just two times, many are asking who this young man is.

Well, you are going to discover some facts about the young Rawlings which will provide answers to some questions you may have.

Because little is known of him, the information available on him is quite limited:

2. He was named by his father after a Kenyan freedom fighter called Dedan Kimathi who lived and defended the rights of his people and consistently questioned the integrity of his leaders.

3. He is the last born of his four siblings: Zanetor Agyemang Rawlings (Member of Parliament), Yaa Asantewaa Rawlings and Amina Rawlings.

4. Kimathi began his early education in Accra at the Morning Star School and North Ridge Lyceum.

5. He proceeded to have his high school education in England, United Kingdm at the Millfield School where he excelled in all subjects.

6. Kimathi’s love for Science, Business and Law inspired him to further his tertiary education at the Aston University in Birmingham England where he studied and graduated with Bachelor of Science (BSc) in International Business.

7. According to his LinkedIn profile, Kimathi was licensed and certified by the MDT International in Negotiation Skills for the Oil & Gas Industry in 2012 & Introduction to Oil and Gas Production in 2013.

8. He is an Experienced Commercial Advisor and Negotiator who has been working in the Oil and Gas industry for over a decade.

10. He has been working with Eni, an Oil and Gas conglomerate headquartered in Rome Italy as their Commercial and portfolio advisor since 2010.

11. Kimathi Rawlings is currently the International Negotiator at Eni in the Milan Area in Italy.

12. He currently lives and works in London, England United Kingdom and was seen in Ghana in recent times during the deaths of his grandmother, Madam Victoria Agbotui and his father Jerry John Rawlings.

13. Kimathi Rawlings’ marital status is fairly unknown but it reported that he is currently single and has no child.

14. Until recently, Kimathi Rawlings had no Twitter account while his Instagram account remains private. However, he has always been away from social media and the limelight despite the fame and pomp surrounding his family.

‘I made Sarkodie’s Original in my bedroom’